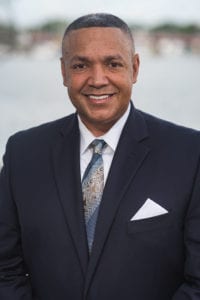 Robert joined the Murphy Team as a Sales and Leasing Associate in 2020.

Before joining the team, Robert worked as a senior medical sales consultant for a service-disabled veteran owned small business and was responsible for the sales, marketing and management of accounts for VA Medical Centers in Baltimore, Oklahoma City and Houston.

A 31-year Naval Officer and Operation Desert Storm veteran, he retired in 2019 as a Navy Captain. Prior to retiring, he served as the Director of Safety at the United States Naval Academy and managed a multifaceted prevention program that ensured the safety and welfare of 6500 personnel and 300 facilities.

A strong background in project management and community outreach, Robert was the Director of Operations for Navy Recruiting in 2014-2015 and led the strategy development and operational management of the Navy’s recruiting efforts throughout the United States, including the recruitment of over 62,000 personnel.

As a prior lead analyst for the Office of the Secretary of the Navy during a Base Realignment and Closure review, he identified facility relocations and closures that resulted in $255 million in projected savings.

Robert had been an investor in residential rental properties throughout the country for many years and decided to pursue a career in commercial real estate due to his entrepreneurial spirit and strong desire to work with business owners, investors, non-profit companies, corporations and state and federal government agencies.

An engaged Maryland resident, he was appointed to the Board of Appeals by the Mayor of the City of Annapolis and to the Maryland Park Advisory Commission by the Governor both in 2019.

Always active in the community, Robert was previously a Big Brother in the Big Brothers/Big Sisters of Southern Maryland program and a volunteer and board member for the American Red Cross. He currently serves on the boards of the Anne Arundel County Boys and Girls Club and the Rotary Club of Annapolis as the Vice President of Community Outreach. He is also actively involved as a mentor in two Annapolis youth mentoring programs.

Robert and his family fell in love with the people, culture and scenic beauty of Annapolis and decided to make it there permanent residence in 2016.