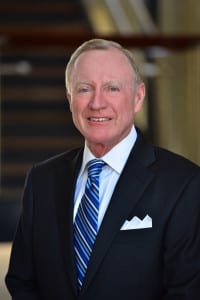 Dennis Murphy is the Owner/Broker of Murphy Commercial Real Estate Services and former Managing Partner of Murphy Hogan Commercial Real Estate Services. Prior to moving to Annapolis he served as President of Smithy Braedon/ONCOR International. Smithy Braedon was one of the largest, privately owned commercial real estate firms in the Washington Metropolitan area. With offices in Maryland, DC and Virginia, Mr. Murphy was responsible for the management and administration of all operating divisions.

A native Washingtonian, Mr. Murphy served in the United States Marine Corps and is a decorated Vietnam veteran. Following his tour of duty in Vietnam, he directed the offices of Veteran Affairs and Manpower Administration in Prince George’s County. In 1976, he began a successful career as both development coordinator and director of marketing for the Prince George’s County Department of Economic Development. He went on to serve as Senior Industrial Development Representative for the Maryland Department of Economic and Community Development. Accordingly, he worked closely with the cabinet Secretary and Governor helping to coordinate several marketing and business development initiatives in the United States and abroad.

Following his employment with the State of Maryland, Mr. Murphy coordinated the marketing efforts of 17 area jurisdictions, while serving as Manager of the Business Development Bureau of the Greater Washington Board of Trade. In 1987, Mr. Murphy was appointed to the position of President and Chief Executive Officer of the Prince George’s County Economic Development Corporation; a private, non-profit corporation involved in all aspects of new development, business assistance, commercial and community revitalization, minority business development, financial assistance, research and marketing.