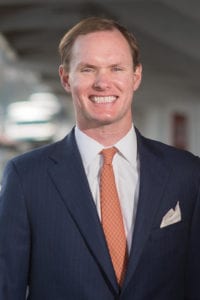 Camp Kilcollin is the newest member of its team. Coming from the finance industry, Kilcollin makes a career change by entering real estate, but it’s a transition he wholeheartedly embraces. “I’m shifting gears and I look forward to helping businesses buy, sell or lease commercial properties,” says Camp.

Originally from southern West Virginia, Kilcollin graduated from Woodberry Forest School before earning his undergrad in economics from Sewanee – the University of the South. He relocated to Washington, D.C., after college and started his career in political fundraising before becoming a financial adviser. For the past five years, he has been with the investment management company Merrill Lynch, where he gained what he describes as “a lot of experience working with clients and helping them solve their problems.”

Kilcollin later relocated to Annapolis, and when he was considering a career change, he narrowed in on Murphy Commercial Real Estate because he found himself drawn to the physical, tangible nature of the industry — everything from architectural design to how buildings and properties play a role in the operations of a business. He also knew that Murphy Commercial Real Estate has been a market presence for 20 years.

He met with owner and broker Dennis Murphy, which solidified his interest in the company. “His vision, the way he works, his ‘how can I help you’ approach made a lot of sense to me,” Kilcollin says. “That’s the reason I decided to go with Murphy.”

Kilcollin is eager to focus on landlord and tenant representation, as well as investment sales, and he expects that his financial background will be beneficial in his approach toward real estate. He sees Annapolis and the Baltimore,-Washington region, with its robust mix of Technology companies, government contractors, investors and retailers, as a business engine for the whole state. He looks forward to helping assist these businesses and seeing them thrive.

When he isn’t working, Kilcollin is a dedicated family man alongside his wife as they raise two kids, currently ages 5 and 3. He’s also active playing tennis with the United States Tennis Association and cycling with Tribe Cycle.

To reach Kilcollin, give the Murphy Commercial Real Estate office a call at 410-266-1113 or email him at ckilcollin@murphycre.com.