Catching Up With Camp Kilcollin 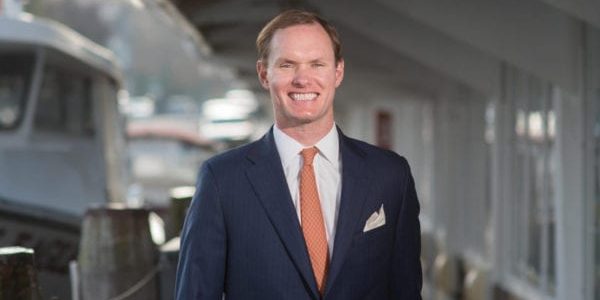 Newest team member of Murphy Commercial Real Estate opens up about his business philosophy, what drives him, and why he loves his new career path

“Sometimes, your career just kind of finds you,” explains Camp Kilcollin, an Annapolis resident who recently joined the team at Murphy Commercial Real Estate. Although his background in economics, as well as his love of helping people solve problems, has been beneficial for him in his new role, he’s put in a lot of work over the past few months to get up to speed with everything commercial real estate entails. “It’s going well,” he says. “It’s definitely a transition.”

But it’s a transition that he wholeheartedly embraces. “I like the tangibility of real estate, how it works for business,” he adds. “It’s easier to wrap your head around than a stock or a bond.”

The new career change for Kilcollin comes after five years with Merrill Lynch, where he worked as a financial adviser. Investment management and commercial real estate may be different industries, but he finds that many of the same skills apply — primarily a strong understanding of numbers. Kilcollin earned his bachelor’s degree in economics from Sewanee – the University of the South in Tennessee after graduating from Woodberry Forest School in Madison County, Virginia.

As for studying economics, he says, “It prepares you for everything and nothing at the same time.”

Kilcollin first put his understanding of finances and numbers to use when he started his career in political fundraising in Washington, D.C., before he moved to Merrill Lynch.

He and his wife, who have a 3-year-old and a 5-year-old, made the move to Annapolis after visiting and falling in love with the community. “Annapolis is an amazing town, with the water and the activity associated with it,” he explains. “It’s a great place to live. It’s like living in a vacation destination.”

That was when he started searching for jobs in commercial real estate, and Murphy was the office that clicked with him the best.

A trusted name in the industry for more than 20 years, Murphy Commercial Real Estate handles sales and leasing of properties for retailers, restaurants, offices, medical practices and warehouses, as well as land for commercial use. With the motto “Exceed your expectations,” the professionals who serve the firm represent both tenants and landlords.

Kilcollin credits owner and broker Dennis Murphy with helping him in the career change, guiding him along the way and putting him in situations where he can gain experience. In fact, Murphy’s expertise is a primary reason Kilcollin found himself drawn to the company. “Mr. Murphy’s approach to real estate made sense to me,” Kilcollin explains. “He has a simple, straightforward, logical approach, and he wants to help.”

The want to help was a major factor for Kilcollin, who sees problem solving as the most important aspect of his career. “I always knew that I would end up in some job where I help people solve a problem,” he says. “That was really what I cared to do. I wanted to provide a service.”

He also sees satisfied clients as the most rewarding part of his new career, something he evaluates based on the positive feedback he gets from them and the referrals they make. “It’s a way of measuring success,” he says.

It has also been rewarding for him to find out how adaptable he can be as he moves from one industry to another. “Something you’re not taught in school is that you have to adapt to situations,” he says.

Part of that comes from learning, which he strives to do constantly. Kilcollin reads 20 books a year, all nonfiction, and his current topic of interest is, of course, commercial real estate, along with books about personal development. He also serves as a class agent for his old high school, as he believes education is important.

But in addition to exercising his mind, he also believes in the importance of physical exercise, and he strives to stay active every day. He can often be found doing a spin class with Tribe Cycle or playing tennis through the U.S. Tennis Association.

On top of all of that, however, he says that spending time with his wife and children is his biggest priority. “Family is No. 1,” he summarizes.

Kilcollin looks forward to the chance to help more commercial enterprises in the Annapolis area achieve their goals and solve their problems, and he encourages anyone who is interested in working with him to reach out via phone at 410-266-1113 or via email at ckilcollin@murphycre.com. Helping others, he says, is why he does what he does. “I believe you can have anything in life you want if you help enough other people get what they want,” he concludes.