Roy Rogers – Back in Town and Open in Crofton! 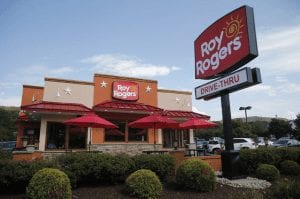 CROFTON, MD (November 2015) – Murphy Commercial is pleased to announce a their work in bringing the 1st Roy Rogers back to Anne Arundel County in more than 20 years. Mid-States Restaurant Group has signed a long-term lease agreement for the old KFC site on Rte. 3 in Crofton/Gambrills. John Rosso of Murphy Commercial represents Mid-States Restaurant Group and handled site selection and lease negotiations for the group.

Mid-States Restaurant Group is headed by James King along with 3 other partners, who own and operate Greene Turtle Sports Bar and Blackwall Hitch Restaurants in the MD-VA markets. “There’s been a ton of emails — a lot of people grew up on the brand and are excited to have it coming back,” King said. “I’ve run into people who told me they drive to Frederick on Saturdays with their kids to have it. Hopefully, this will save them some gas money.”

Hardee’s Food Systems operated Roy Rogers until the mid 1990s, which is when it sold 184 Baltimore-area restaurants to McDonald’s Corp. for $74 million. By 1996, there were 16 locations in Anne Arundel County set to close that year. Currently, there are 19 Roy Rogers in the state, including locations in Montgomery and Frederick counties. The restaurants offer an array of options for breakfast, lunch and dinner, including roast beef sandwiches and fried chicken.

Frederick-based Plamondon Cos. owns the Roy Rogers chain and contacted King around two years ago about bringing the brand back to Anne Arundel County. King and his partners are also planning to open a location in Pasadena, off of Magothy Beach Road in the 3rd quarter 2016. The Pasadena restaurant will be near the Greene Turtle Sports Bar & Grille off of Magothy Beach Road near Route 100. News of the chain’s return to the area began in the spring as the company moved through the inspections process with the county. RR Crofton and Pasadena are part of a five-year plan to expand the franchise throughout the Mid-Atlantic.

Amazon HQ2: How the Commercial Real Estate Industry Is Reacting to the Decision
November 30, 2018